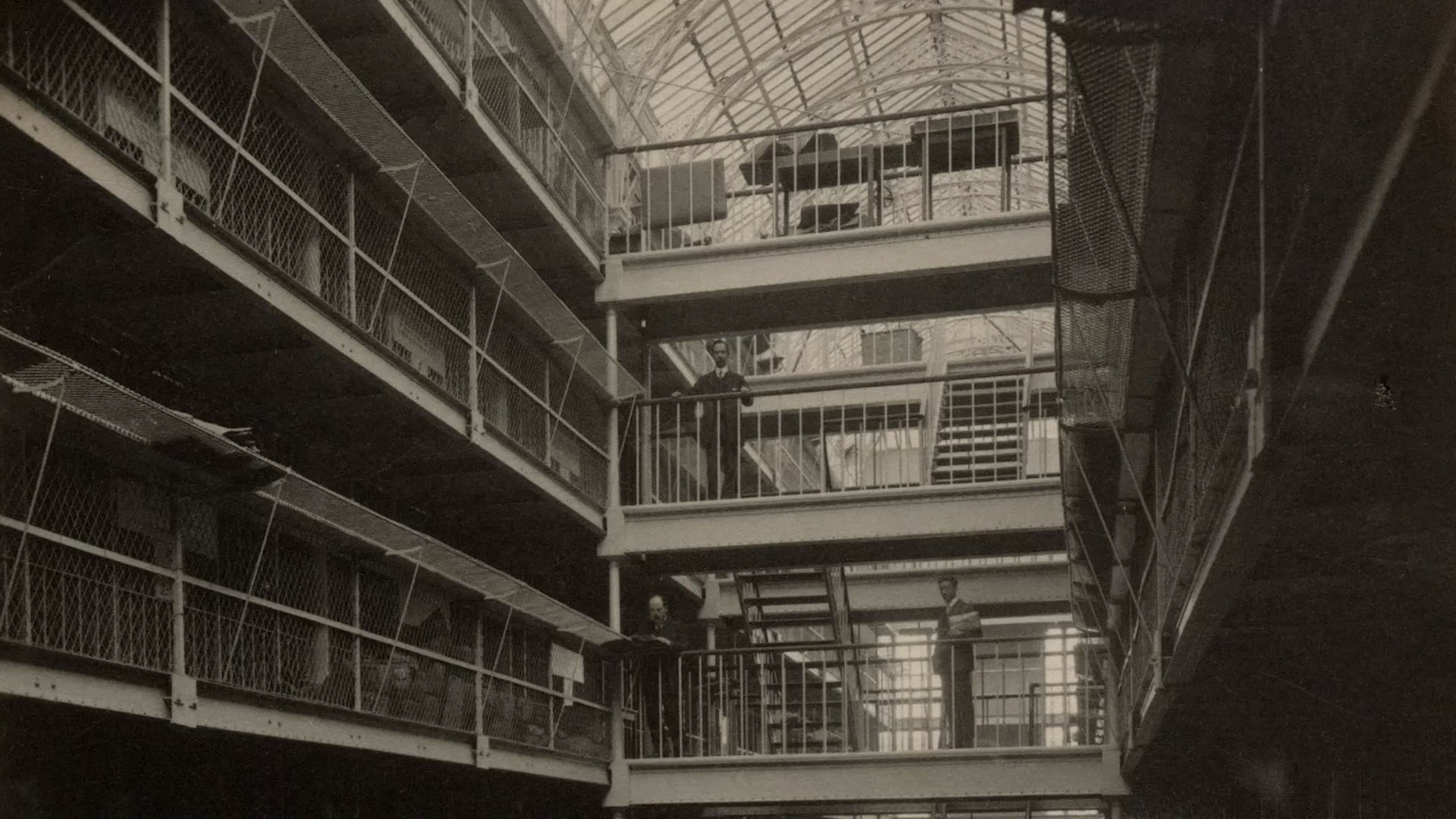 This exhibition is presented by the National Archives of Ireland in partnership with the Irish Architectural Archive and tells the story of the once magnificent building that was the Public Record Office of Ireland; from its construction to its burning during the Battle of the Four Courts in June 1922 to its final reconstruction. 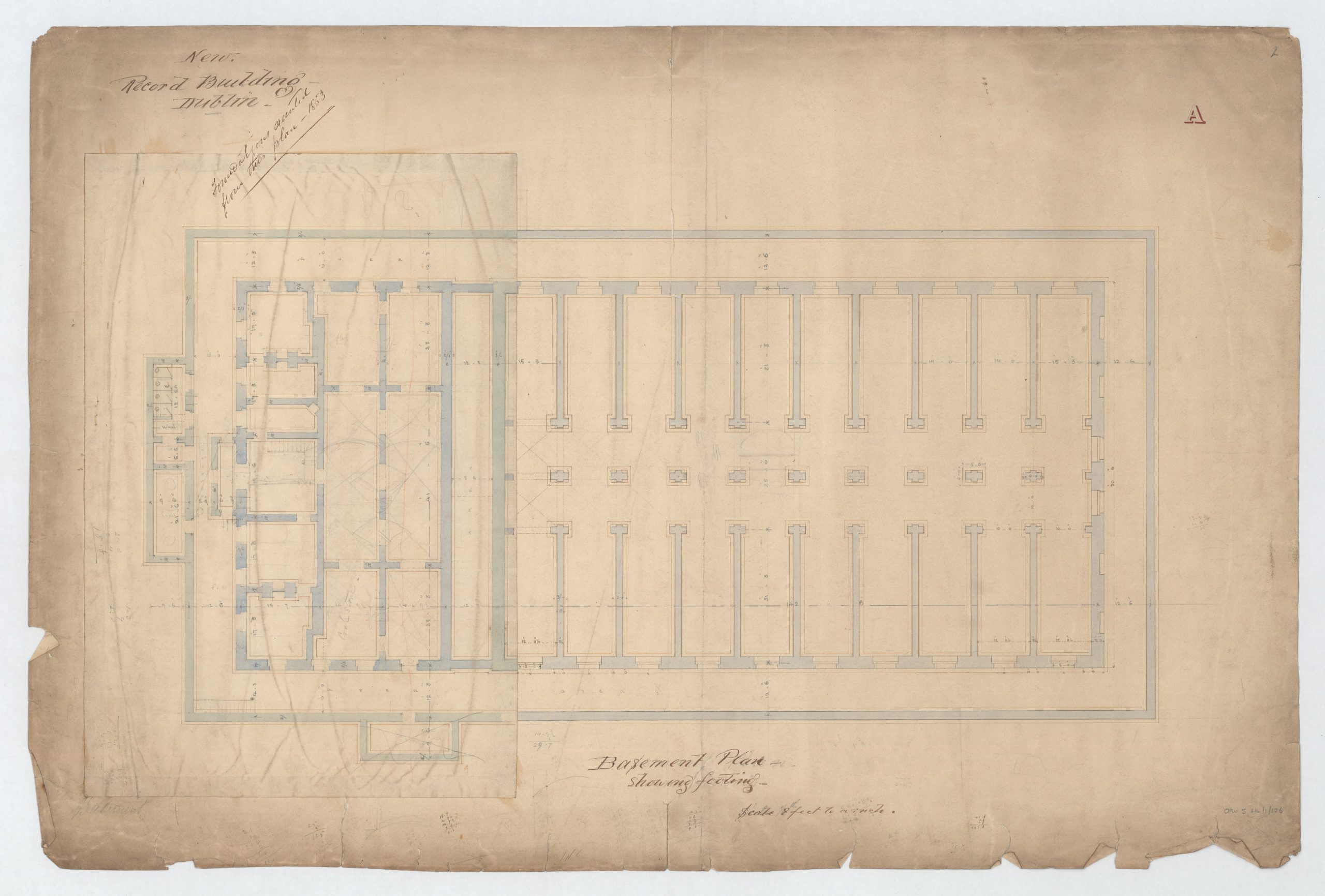 The Public Record Office was a highly innovative structure, carefully designed and purpose built to function as an archival repository. Built between 1864 and 1866, the Public Record Office consisted of a three-storey over-basement Record House with staff offices, a caretaker’s apartment, a library, a binding room and a public reading room.  Behind the Record House was the Record Treasury, an enormous six-storey building containing 100,000 square feet of shelving with records accumulated over seven centuries. 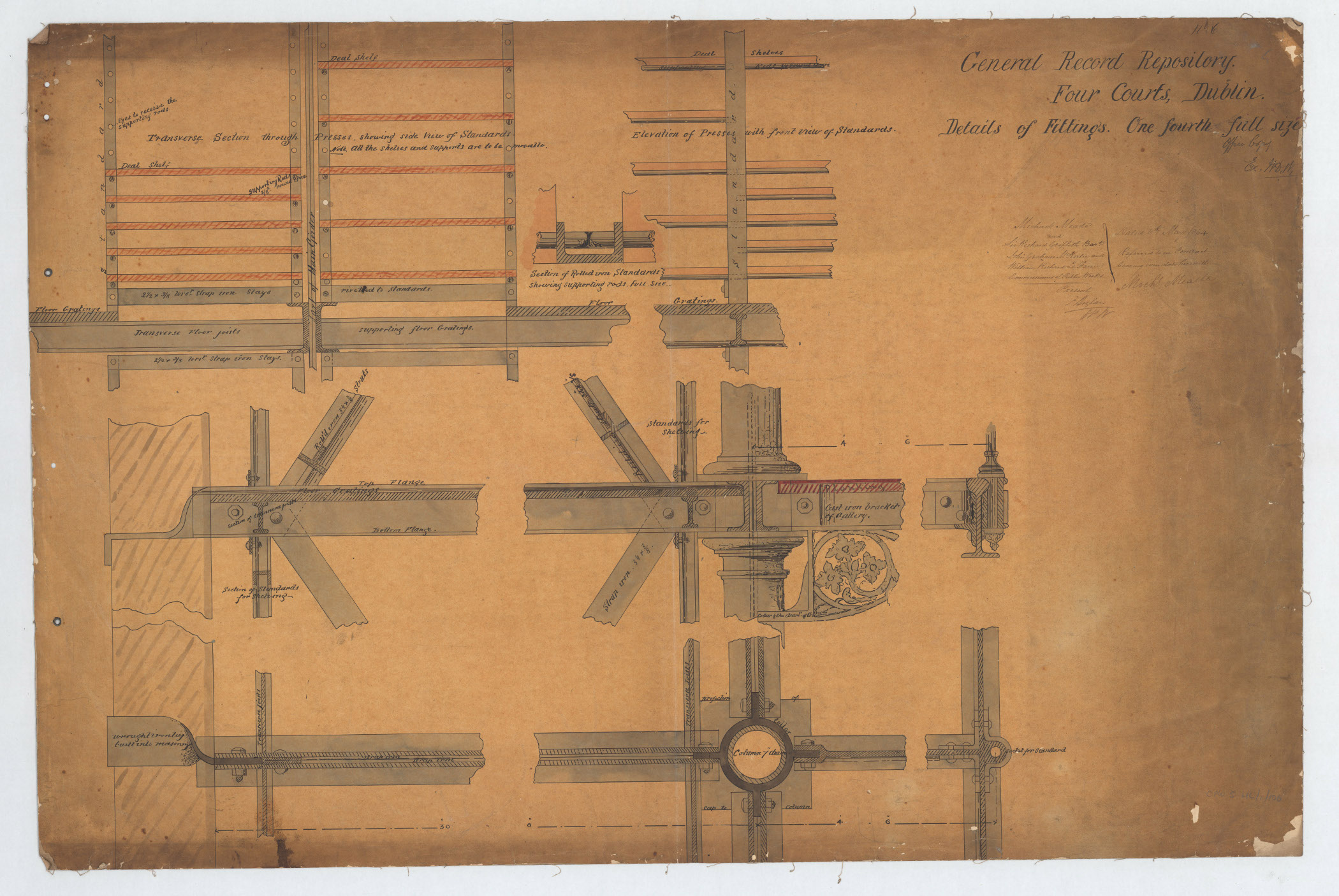 The building’s external architectural expression announced the importance of its function; granite walls dressed in a restrained classicism which speaks of responsibility, seriousness, tradition, and permanence. The centrally-placed reading room, with its coved glazed roof, provided not only a highly suitable space for consulting archives, but a space whose architectural austerity amplified the dignity and importance of that activity. And then there was the Treasury – a fantastically innovative space in which cutting edge technology and the materials of the age of Railways – iron and glass – were deployed to enclose and preserve the memory of a nation. 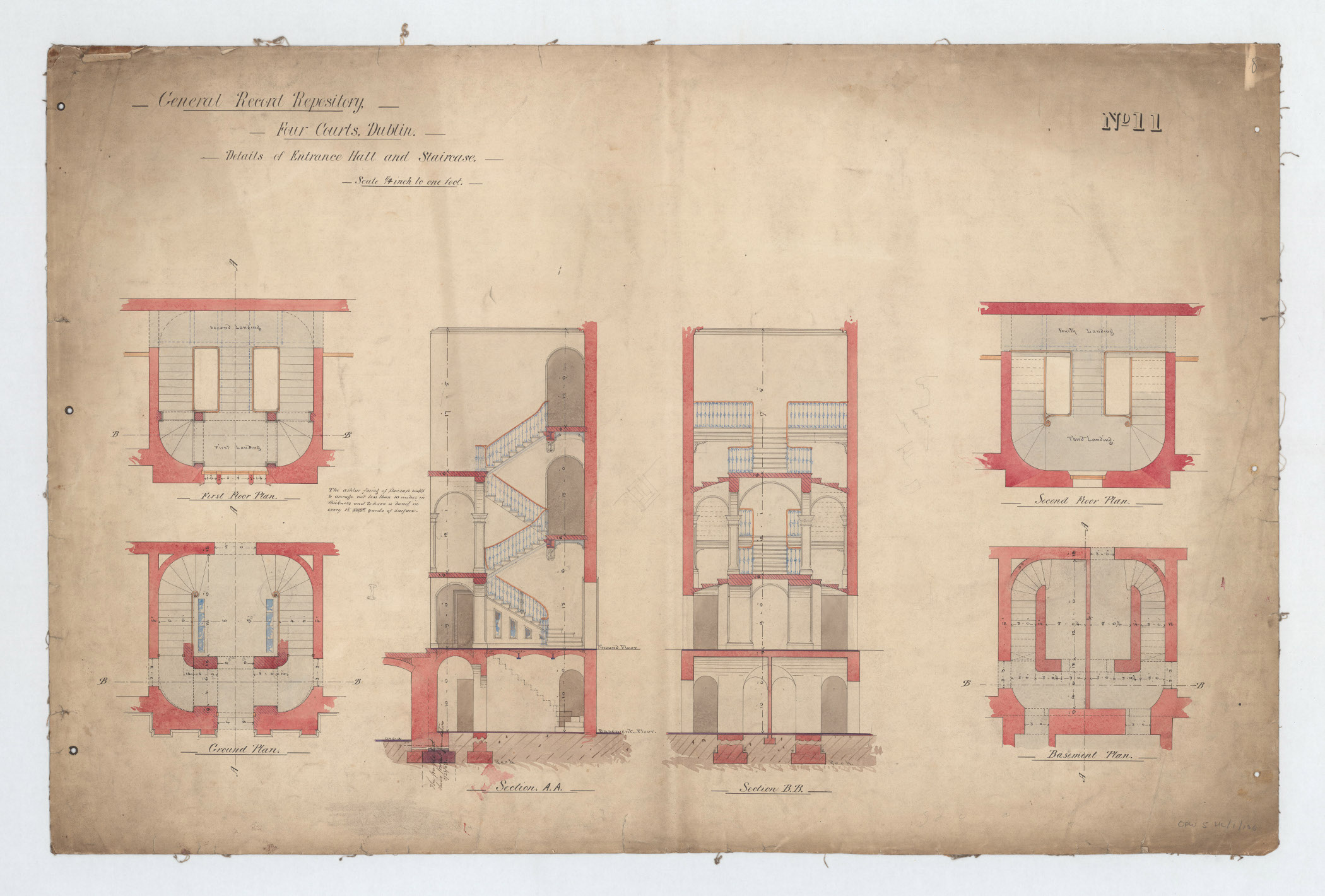 In April 1922, anti-Treaty forces occupied the Dublin’s Four Courts buildings, where the Public Record Office of Ireland was located. On June 30th 1922, an explosion in an adjacent building at the Four Courts started a fire which spread to the Record Treasury. The fire destroyed much of the building and most of its contents. 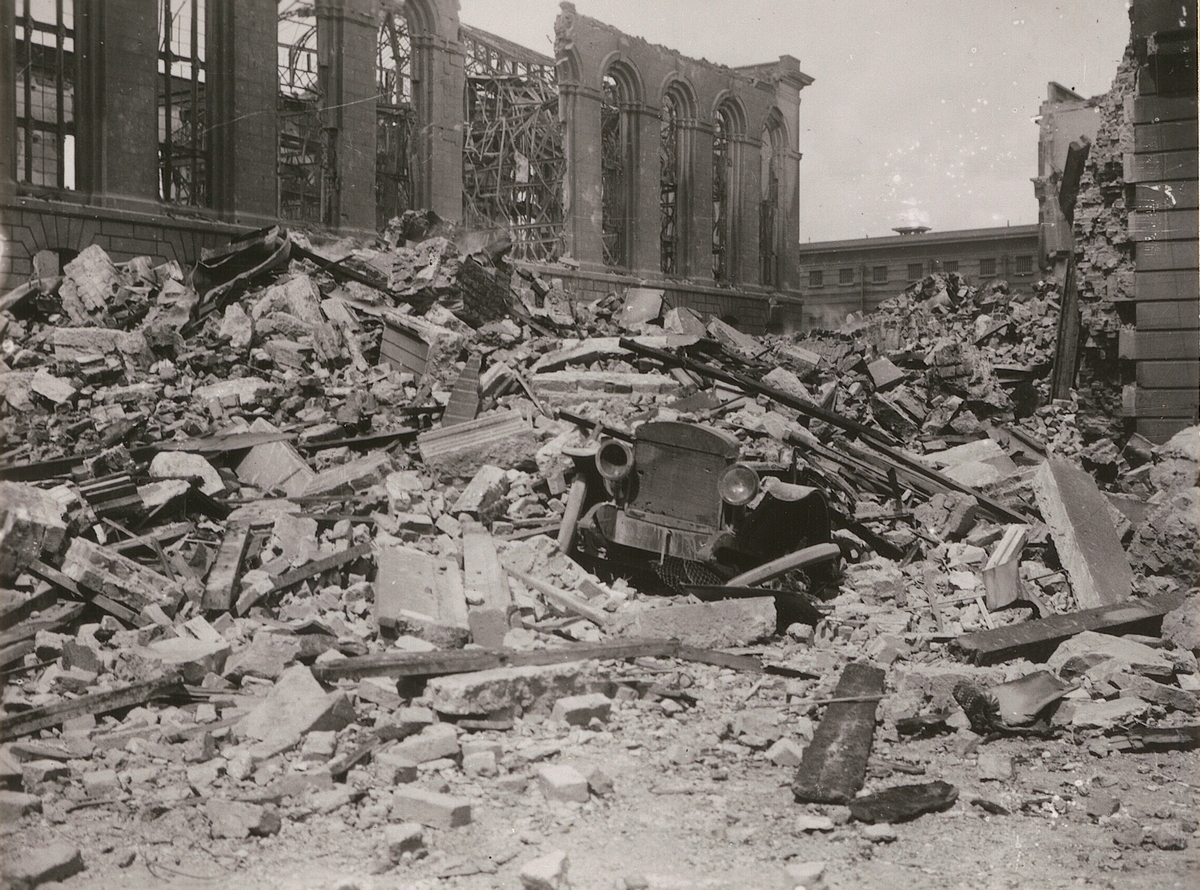 Within days, staff of the Public Record Office began the momentous task of retrieving the records from the rubble. Gathering documents found amongst the ruins, staff sorted and identified them. In just under a year they packed 25,000 sheets of paper and parchment into nearly 400 bundles. However, it would be a century before staff of the National Archives would begin working on these salved records.

By 1923, the Public Record Office building was sufficiently repaired to allow staff to resumed working on site. Reconstruction works then started on a more modest replacement building. This building is now occupied by the Court of Appeal to the front and the National Archives to the rear and basement.

The Irish Architectural Archive would like to thank Orlaith McBride, Zoe Reid, Karen Downey and Hazel Menton of the National Archives, and Dara Lynne Lenehan and Brian Hickey of Epic.