In December 1996 No. 45 Merrion Square was assigned to the Irish Architectural Archive, and the process of making the building suitable for use by the Archive began.

The Archive had prepared a detailed brief outlining its accommodation needs, and the Office of Public Works developed a programme of works for the building which would ensure that the Archive’s requirements were fully met. In all, a total of three planning permissions were sought and granted in relation to various aspects of the proposed scheme and in April 2003 work finally began on site.

From the start the project was conceived as falling into two distinct parts – the restoration and refurbishment of the 1780s house to provide public and staff facilities and the construction of new archive stores to house the collections. The basic structure of the original house was extremely sound throughout. For example, floor loading tests revealed that floor strengthening was unnecessary to achieve the required loading strengths. However, the house had suffered the normal attrition to be expected from over 200 years of constant domestic and institutional occupation. In addition there were the more severe interventions caused by its division of the building two separate dwelling houses and the ad hoc nature of the subsequent reunification. The programme of repair has seen the painstaking removal of the interventions caused by that division, and the reinstatement of the original plan, which has allowed the once grand spaces of the house to re-emerge. All of the original plasterwork has been cleaned and repaired. Similarly , the original joinery has been restored, as have the glazing patterns in the windows while all of the shutters throughout the house have been repaired and are fully functional.

In tandem with the restoration of the original fabric, the services of the house have been fully up-dated. Standard elements such as new wiring and plumbing have been complemented by the careful insertion of a modern information technology backbone. The building has also been made fully accessible. A lift, encased in a deliberately modern glass and steel shaft abutting the rear of the building, provides access to all floors.

The original house now accommodates the Archive’s offices, staff facilities, archival processing areas and public areas. The public facilities in particular have been enhanced. In addition to a larger reading room, located for accessibility on the ground floor, public areas now also include lecture facilities, meeting and seminar rooms and an exhibition gallery where the Archive’s collections can be made accessible to the public at large. The fit-out for the exhibition space is that originally designed for the RIBA’s Heinz Gallery in London.

The programme for No. 45 also entailed the construction of new archive stores to accommodate the growing collections. These were built underground to the rear of the old house and are designed to provide the exacting storage environment demanded for the long term preservation of paper documents in a passive way without the use of mechanical air-conditioning. This is the first time that this ‘green’ solution has been used for archival storage in Ireland. It is an approach which demanded a very high attention to detail during construction but has resulted in a highly efficient and cost-effective building.

This marriage of careful architectural conservation and cutting-edge sustainable building technology made the task of transforming 45 Merrion Square uniquely challenging. The Office of Public Works – and in particular Senior Architect Niall parsons – deserve great credit for the innovative approach adopted in this project. 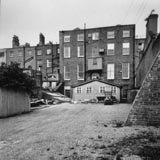 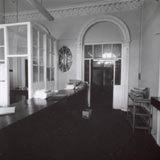