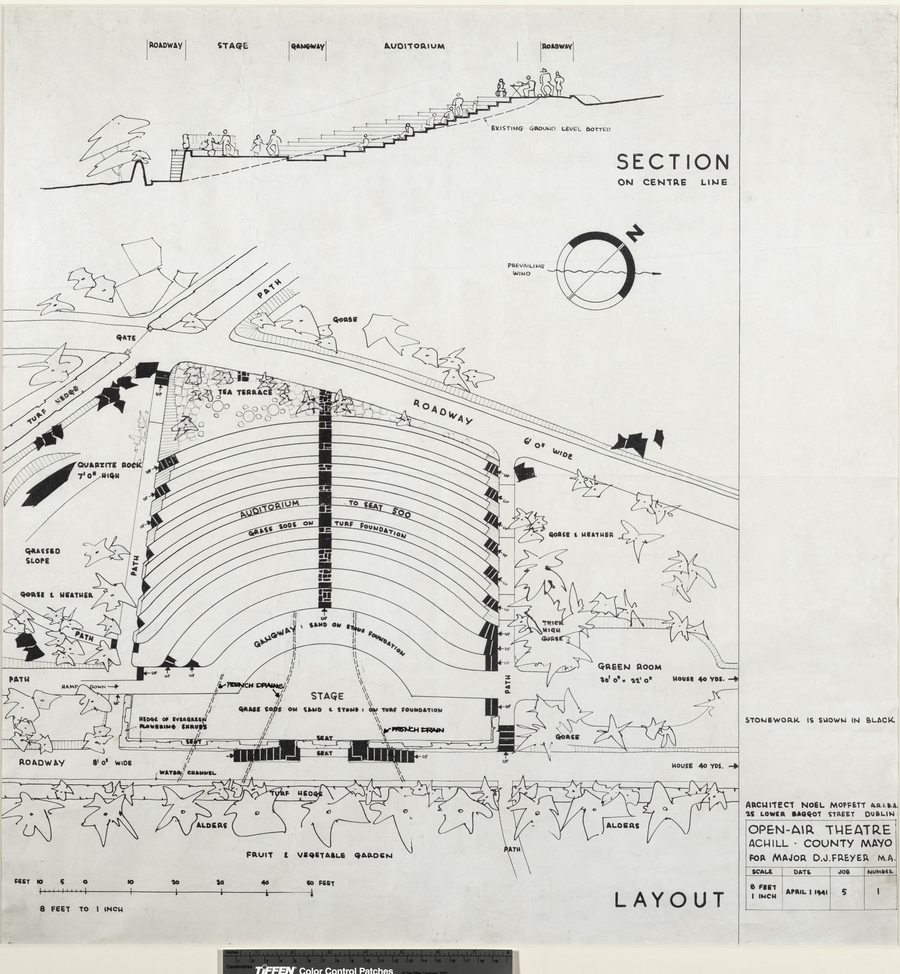 The outdoor theatre which Noel Moffett (1912-1994) designed for Major Dermot Johnston Freyer (1883-1970) in 1941 was the first, and possibly the most eccentric, project of an extraordinary career. Born on Christmas Day 1912, Moffett was educated in Cork and Dublin. He completed RIAI testimonials of study before taking a B. Arch degree in the University of Liverpool (1937). He was briefly an assistant architect in Liverpool Corporation Housing Department (1938) before moving to London where he work for a number of architects including Serge Cehrmayeff and Joseph Emberton. He returned to Ireland as war broke out. In Dublin he designed several exhibitions, promoted an interest in prefabrication and innovative building solutions through the Tomorrow Club, and ran a private architecture school. With his first wife, Margot, he also became involved in the White Stag group of artists. It was through this connection that the Achill commission came about. 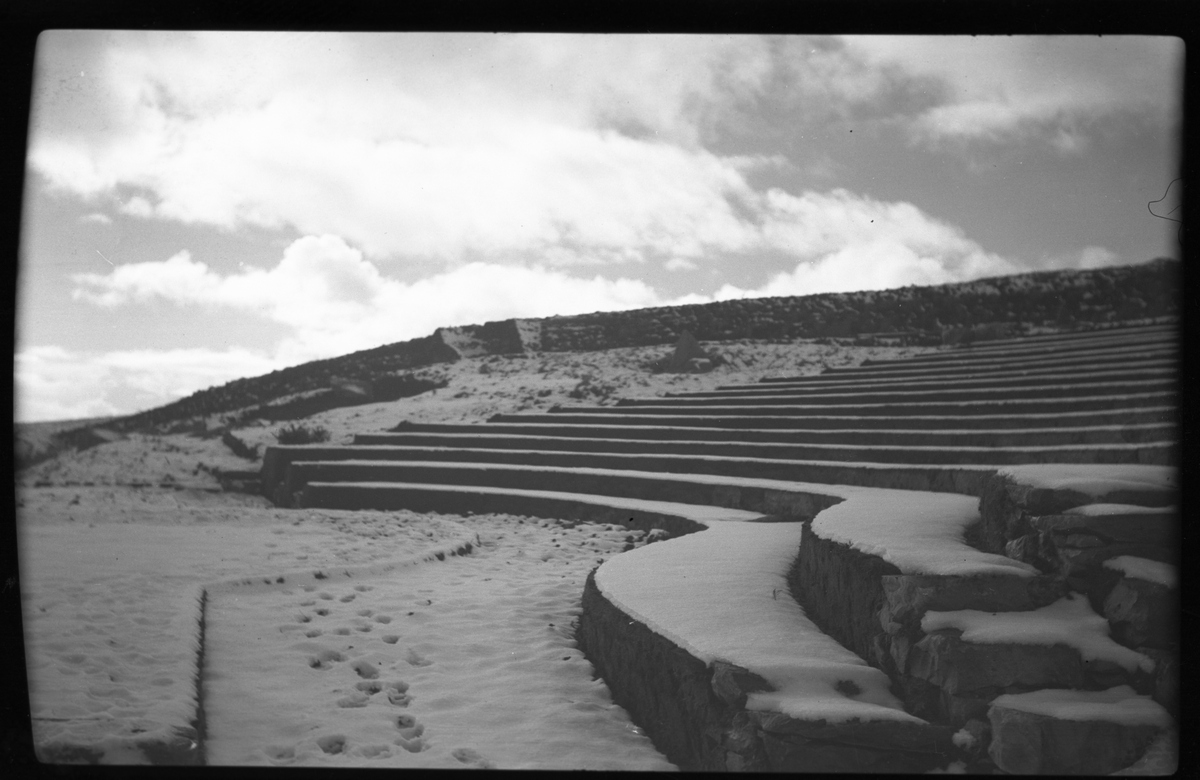 Ignoring the fairly obvious challenges that an outdoor theatre might face anywhere in Ireland, never mind an island location off the west coast, Major Freyer conceived of this Epidaurus in Achill as a venue for promoting local interest in native dancing, singing and drama. A noted folk-dancing enthusiast, his theatre would help turning back the tide of foreign dance music. Perhaps the most extraordinary fact about the whole scheme is that it was actually built. The site was adjacent to Freyer’s Achill residence and house, Corrymore House, and the theatre was constructed over the winter of 1940-41. Formed from turf, grasses screes for covering  seats and stage, sand for gangways and paths, and local quartzite for steps, it could seat 500, while the turf stage was 80ft long. The Irish Builder (21 June 1941, p. 303) considered the theatre a ‘charming and practical example of modern landscape architecture’, a building which ‘fits as naturally and unobtrusively as possible into the mountain environment, and has made the most of a very beautiful site’, but realities of rain and wind, compounded by war-time exigencies, undermined any chance it had to be successful. Moffett retuned to London in 1949 to pursue his career in architectural education and social housing, and Freyer left Achill in 1964. By then, the structure was already being re-absorbed by the Achill bog. 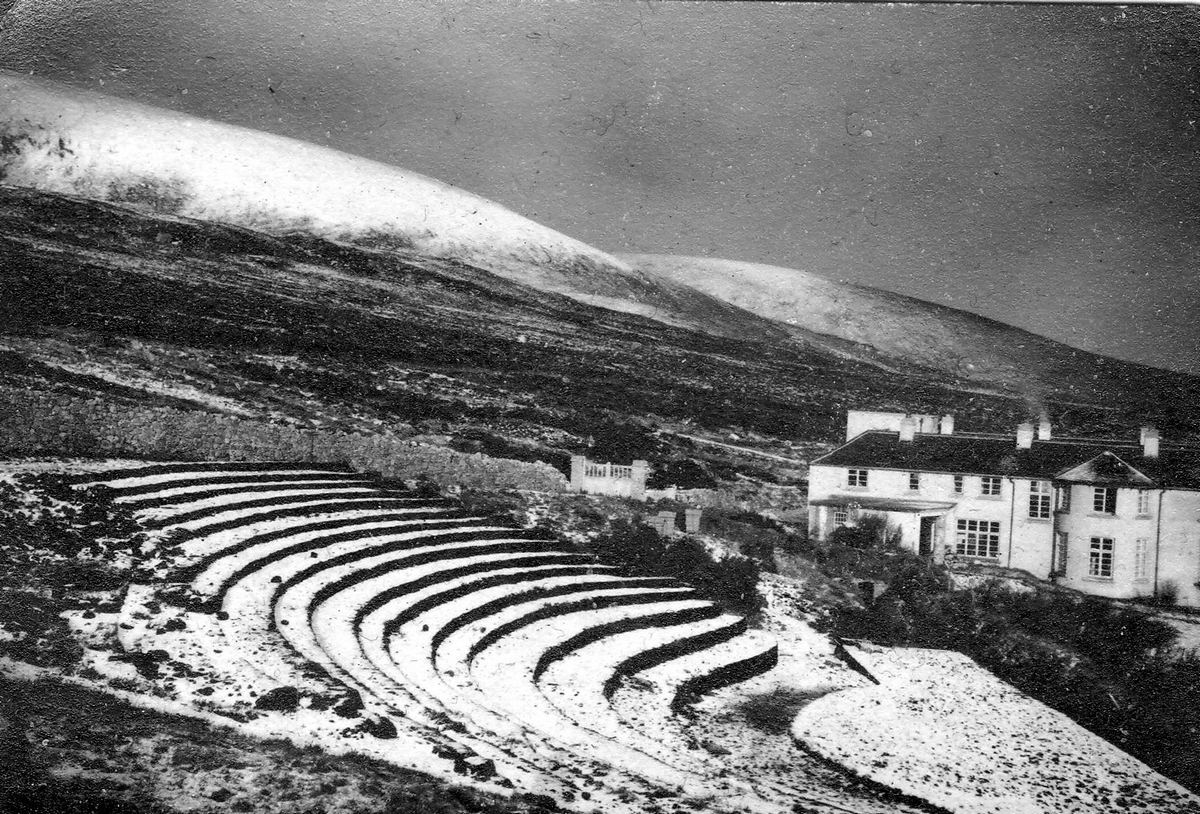