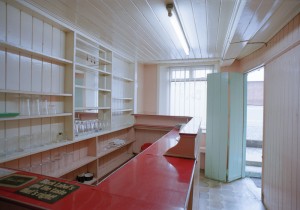 In 2007 Heike Thiele and Winifred McNulty set out to make a record of old family businesses in the North West: in counties Donegal, Sligo, Leitrim, Cavan, Fermanagh, Tyrone and Monaghan. These groceries, draperies, hardware and shoe shops, creameries and pubs were built on a human scale. There was texture in the wood and glass, and memory in the fixtures and fittings – the counters of polished mahogany and the shelves made by the original owner now covered in generations of gloss paint. Preserved by family ownership, by a sense of maintaining what is still useful, or sometimes just by chance, now these places with their unusual paint, crooked shelves, paper rollers, glass fronted cupboards and worn stairs, have become beautiful. 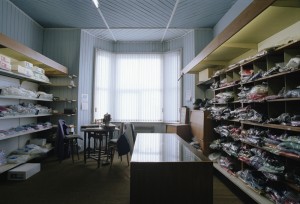 Many of the businesses have ceased trading since the project began. Shops that have witnessed a century of changes quietly close their doors. The shops that remain, and thrive, have capitalised on a specialist, individual product, sometimes selling goods worldwide. The glimpses into these shops leave an imprint of an older quieter time, when ritual and a sense of community were part of shopping. There is a sense of a spareness of needs, a sense of existence rather than choice. It was a time when shopping had not become so tied up with our sense of ourselves, our lifestyle. Yet shopping might still reveal something about a life; cakes and ham and an extra loaf might mean visitors, a suitcase, emigration.

The history of a century of trade reflects back from the stories and photographs of ‘High Shelves and Long Counters’. Hardworking shopkeepers kept up a tradition of local and personal service and now, as their shops disappear from our streets, it is ever more precious to look back and, as Dermot Healy says in the foreword to the book, ‘celebrate the women and men that threw open the doors of the hardware shops and bars and creameries first thing in the morning and swept up last thing at night.’ 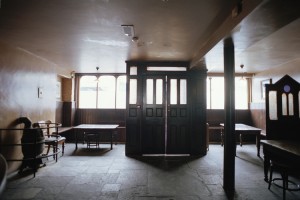 Following successful exhibitions in Donegal Bay and Bluestack Festival, Mountcharles, 2010, and the Errigal Arts, 2011. In Mountcharles the photographs and excerpts of texts were displayed in the windows of the unused shops so that for a week the village became a gallery. The book High Shelves and Long Counters was published in 2012. This is the first time that the exhibition has been presented in Dublin.