THE CHURCH OF IRELAND’S ARCHITECTURAL DRAWINGS

The Church of Ireland’s churches, cathedrals and glebe houses have made an indelible impression on the Irish landscape. Spires, towers and pinnacles punctuate the skyline while in subtler ways the residential aesthetic of the glebe houses provide visual indicators of the former pre-eminence of the Church of Ireland – the Established or state Church until 1871.

Whilst many of the churches no longer function as places of worship, and the surviving glebe houses have either passed to private ownership, or have simply disappeared, an extensive collection of almost 9,000 original drawings (plans, elevations, sections, details) documents this ecclesiastical world, providing an important resource for understanding the architectural, liturgical, social and cultural development of the Church of Ireland through the centuries.

The drawings were created for the most part under the auspices of the Ecclesiastical Commissioners (1833 onwards) which had succeeded the Board of First Fruits (founded in 1711). Most were initially accumulated in the diocesan registries to which they related, while others passed directly into the custody of the Representative Church Body (RCB) the charitable trust created after Disestablishment in the 1870s. Over the decades, these have been carefully accessioned and arranged in the RCB Library, founded in 1931, which is the Church of Ireland’s record repository.

There are 860 drawings for the cathedrals of Christ Church and St Patrick’s in Dublin as well as the diocesan cathedral of St Canice’s in Kilkenny, while a further 300 drawings are of glebe houses, but the majority (some 7,600 drawings) show varying aspects of the parish churches throughout the island. Included are drawings by disguised architects such as John Semple, James Pain, Joseph Welland, William Farrell, William Atkins, Lanyon, Lynn, Lanyon, J. Rawson Carroll, and W.J. Barre.

Many are beautiful artworks in their own right while others are working drawings on tracing paper. Often outsized, they are also fragile and cumbersome to handle. To reduce the wear and tear, but also to showcase them to a wider audience, the drawings have been systematically digitised and catalogued in the Library, and are now freely available to view online. 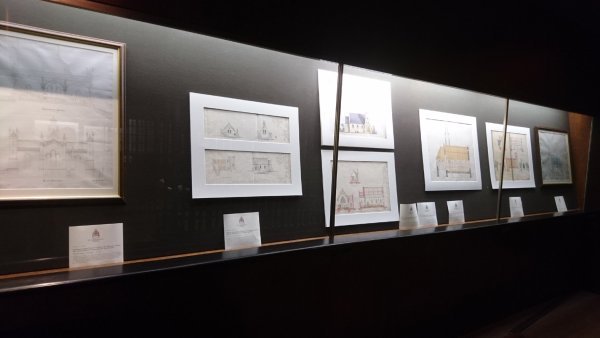 A Visual Window to an Ecclesiastical World is arranged chronologically and thematically, aiming to guide the viewer through a representative selection of the overall collection and literally open a window to the past, telling the story of who designed these buildings, why, and when they were built (or rebuilt). The exhibition is one of the Church of Ireland’s events commemorating the 150th anniversary of Disestablishment.