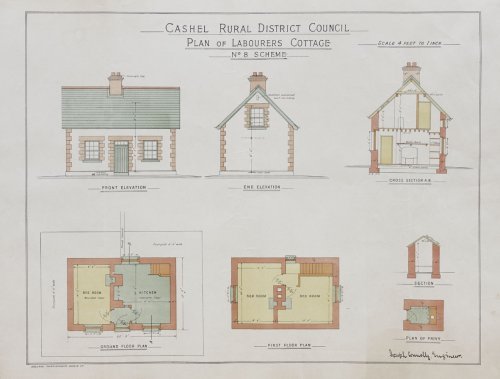 In parallel with the late-nineteenth century movement to improve working-class housing in Irish town and cities, typified by the activities of the Dublin Artisans Dwellings Co., there were also efforts to address the appalling inadequacies of rural housing. In 1869 the Board of Works published drawings for a prototype rural labourers house, a two-storey, four-roomed cottage. The Irish Party campaigned hard to secure the passing of the 1883 Labourers’ (Ireland) Act, the first legislation to address the issue of rural housing. Twelve or more local ratepayers could apply to the local Board of Guardians to undertake a scheme of cottage building. Under this and subsequent Labourers’ Acts up to 1936, tens of thousands of rural labourers cottages were built.

This design by engineer Joseph Connolly may be considered typical of the rural houses constructed in the first decades of the twentieth century. Surveyor to Cashel Urban District, Co. Tipperary, from 1918 or earlier until c. 1952, Connolly was appointed architect for two new slum clearance and housing schemes in Cashel in 1935.

The house, with its concrete foundations, floor (to the kitchen) and walls, and its tiled roof, is an evolution of the 1869 OPW prototype. A two-storey, four-roomed cottage, it is similar in size to near-contemporary urban two-storey terraced houses, and like them had an external toilet. The central hearth in the kitchen provided the only source of heat and cooking.

Generic plans of rural housing continued to be issued, in particular by the Department of Local Government, into the 1950s. While larger house designs were available, the basic two storey cottage remained very similar to this Tipperary example.