The Dublin Artisans Dwellings Company was a semi-philanthropic private enterprise established in June 1876 to provide quality housing for the city’s working classes, and to make a profit while doing so. Capital raised through share issues and Government loans was used to build houses. The rents collected – and the Company’s rents were always considered high – were used to repay the loans, maintain the building stock, pay dividends to the shareholders, and remunerate the directors. 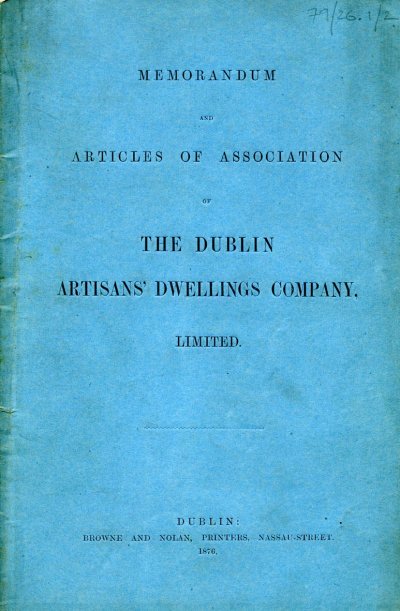 The Company’s earliest developments were blocks of one- or two-roomed flats but it quickly concluded that flats, though cheaper to build, were less popular and therefore less profitable than individual houses. Most of the Company’s schemes consisted of terraces of single-storey cottages and two-storey houses laid out in groups of parallel streets, a template readily followed by Dublin’s municipal authorities and hence one that came to characterise whole areas of the city well beyond the boundaries of the Company’s activities.

To control costs and speed of construction, a small number of common house designs was used across the Company’s schemes. The simplest house, designated Type A, was a two-roomed cottage with one fireplace and was in use from the early 1880s to the late 1890s. The Type E cottage, a three bay, three roomed (living room and two bedrooms) single storey dwelling was the most common of all house types constructed by the Company, used in at least sixteen separate schemes from 1883 to 1909.

The outbreak of World War I interrupted building activity, a hiatus prolonged well beyond the end of the war by a protracted rent strike. Three further schemes were built from 1929 to 1933. The basic dwelling had now evolved into an eight-roomed house with a kitchen, an internal bathroom, front and back gardens and mains electricity.

Citing what it regarded as unfair competition from local authorities, who were now providing working-class housing irrespective of profitability, the Company found itself unwilling to develop further schemes after 1933. In 1961 it adopted the policy of selling off its houses and using income generated to invest in purely commercial property. The last of the houses were sold in 1979 and the Company, by now renamed D.A.D. Properties Ltd, was taken over by Rohan Holdings in 1984.

Between 1879 and 1933, the Company built 3,600 dwellings in over thirty major schemes across Dublin City, in Dun Laoghaire and Bray, most of which survive in use to this day. They constitute a legacy of distinctive neighbourhoods and communities established and sustained though the provision of decent housing.

The business records of the Dublin Artisans Dwellings Co. were acquired by the Archive in 1979, with a second tranche arriving in 2000. Photographs of the Company’s architectural drawings were acquired in 1990, while dozens of the original drawings, once presumed destroyed, were deposited with the Archive by the Military Archives in 2015. In 2016 Greg Dunn loaned for copying an original drawing for a C type house in Dun Laoghaire.  Most recently, in 2017 a series of files from the early 1960s to the late 1970s detailing the sales of individual properties was acquired via the National Archives of Ireland. This latest acquisition will soon be incorporated into the main collection catalogue which is available here.

Just one lecture left in the Archive’s incredibly successful (even if we do say so ourselves), fully booked out, lecture series to coincide with the ‘Celebrating Pugin’ exhibition marking the bicentenary of the birth of this great Victorian architect:

Restoring Pugin’s Heritage in Ireland – Experiences of a Conservation Architect.

The exhibition will run until the end of May.

Launching in the IAA tonight, ‘Of’ by Tom dePaor and Peter Maybury, a reader on the IAF at Venice Biennale 2010 http://goo.gl/dt1If

This week’s lecture in the ‘Celebrating Pugin’ Lecture Series is now fully booked out.

If you have booked a place but cannot attend, please let us know.

Today is the bicentenary of the birth of the architect Augustus Welby Northmore Pugin. Dr Roderick O’Donnell will lecture on Pugin and Ireland at 1 pm in the Archive’s lecture room and this evening, Jimmy Deenihan TD, Minster for Arts, Heritage and the Gaeltacht, will officially open the Archive’s ‘Celebrating Pugin’ exhibition marking this event.